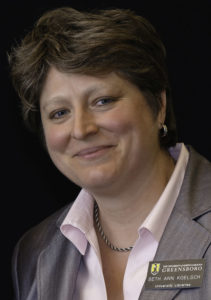 Beth Ann Koelsch has been the curator of the Betty H. Carter Women Veterans Historical Project (WVHP) at the University of North Carolina at Greensboro since 2008. The WVHP collects, preserves, and makes accessible oral histories and other materials that document the contributions of women in the U.S. military and the American Red Cross. Koelsch previously worked as a project archivist at the Sallie Bingham Center for Women’s History and Culture at Duke University, Durham, NC.

Sandra G. Robinson is a Combat Female Veteran and Registered Nurse (RN), with twenty-eight years’ experience. Her background has afforded her extensive familiarity with women Veterans’ post-deployment issues and their gender-specific healthcare needs.

Sandra served in the Army Reserve, 846th Transportation Unit and deployed in theater during Operation Desert Storm. She received numerous medals during her years of duty, to include the Kuwait Liberation Medal and the Southwest Asia Service Medal with three Bronze Service Stars. While being deployed to war wasn’t something she anticipated, the experience proved rewarding, leaving her with a profound sense of commitment to her sisters in arms.

Since her departure from active military service, Sandra Robinson has been a steadfast and devoted supporter of Veterans and Veteran causes. She is the NC Ambassador for Women in Military Service for America Memorial (WIMSA), a VFW Lifetime Member, member of the American Legion and Military Women Across the Nation. She serves on the boards of two Veteran nonprofit organizations and on multiple Veteran committees. She is the Co-Founder of Desert Storm Combat Women (DSCW) Organization and in 2018 Co-Founded the NC Coalition of Women Veterans Organizations (NC-CWVO).  She has served as the State Leader for the National Desert Storm War Memorial. She currently acts as the American Red Cross Service to the Armed Forces Women Veterans Regional Outreach Lead for the Greater Carolina Region, serves on the Trellis Supportive Care Veteran Advisory Council and National Family Support Technical Assistance Center Advisory Board.

It’s one thing to be a Veteran, but being part of a Veteran family adds further nuance to one’s perspective. Sandra may have been the first female in her family to serve in an active war zone, but she is far from the only one to have served her country. In fact, she’s married to a retired 82nd Airborne Combat Veteran.  Sandra’s family consists of heroes of the Vietnam War, Cold War, Desert Storm, Operation Enduring Freedom (OEF) and Operation Iraqi Freedom (OIF).

In 2017, Sandra founded Combat Female Veterans Families (CFVF) United. The purpose of CFVF United is to encourage and facilitate positive reintegration experiences for Combat Female Veterans and their families, through education, support, and advocacy. She is a loyal and collaborative combat female Veteran with a steadfast commitment to quality and preventative care of women Veterans. She currently serves as the organization’s Executive Director. In 2018, CFVF United was chosen to serve on the Steering Committee for the National Military Women’s Coalition (MWC). In 2019, she was appointed chair of the National MWC Housing and Homelessness Policy Committee. 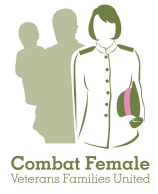 Combat Female Veterans Families (CFVF) United seeks to engage the combat female Veterans of North Carolina, as well as deployed combat females preparing for their returns home to North Carolina. With focus on education, support, and advocacy, CFVF United will act as a conduit between female military heroes and the vital resources they need to ensure long, healthy, and fulfilling lives after war. At CFVF United, we honor the efforts of existing Veterans’ services and strive to partner in our ventures to serve our Veteran community. At the same time, we recognize the areas in which, as a nation, as sisters and brothers in service to others, we can and should collectively improve when it comes to lifting-up and protecting this unique and highly-valued sector of our population.

Charlene Sumlin-Cross is a Military Registered Apprenticeship Consultant for The North
Carolina Community College System Office. She works on Fort Bragg and with industries to promote, develop, and register apprenticeship programs in several counties in North Carolina. She also partners with local community colleges, high schools, workforce development centers, and customized training. Charlene is a native of Fayetteville, North Carolina and has 29 plus years of experience in the training industry. She is a graduate of
North Carolina Agriculture and Technical State University in Greensboro, North Carolina with a Bachelor of Arts degree in Speech and Theatre Arts, and Fayetteville State University, Fayetteville, North Carolina with a master’s degree in Education, Administration and Supervision.